Just like in the past years, this summer included a trip to the Haldern Pop festival, camping there with a few friends, meeting several more and seeing a bunch of nice bands. To top things off, the weekend in question managed to have almost-perfect weather without a single drop of rain – surprising when taking into account that there has been rain pretty much every single day for the past weeks.

Trends this year seem to be the clever ‘self-building-in-two-seconds’ tents which Dan introduced us to a few years ago and which were ubiquitous on the campground now, as well as accordions on stage and moustaches/Pornobalken in people’s faces. I am not sure whether the latter two are good trends. 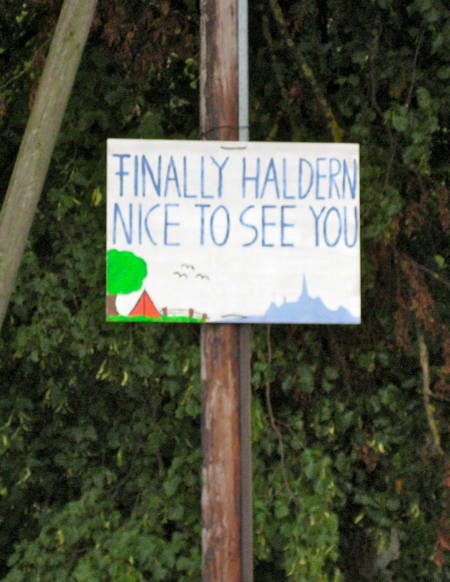 Haldern visitors are a great crowd, have interesting musical tastes and are usually pleasant to camp next to. One problem with them is their enthusiasm. We tried to be there fairly early, arriving on Thursday afternoon, and the campground was already well-filled. So well-filled that we had to put our tents up thirty metres or so from our usual location. Ah well, we’re getting old, I guess. Haldern only started doing gigs on Thursday night a few years ago. And apart from The Flaming Lips’ gig in 2008, they never used the main stage but only the small-ish Spiegelzelt on that day. With so many people already being there and enthusiastic to see some bands, that creates the problem that the Spiegelzelt’s capacity is way smaller than the number of people wanting to enter it. Cue a lot of queueing and plenty of frustration for the people who don’t make it into the tent. Particularly when the sound system of the screen they have to show what’s going on inside the Spiegelzelt is so quiet that you can’t really follow the music.

Knowing about this problem, I was eager to get into the tent quickly as I wanted to see Seabear again. We did manage to get into the tent, but soon learned that the schedule I printed from their website the same morning was wrong and Seabear were going to play much later in the evening. A fact that was stated correctly on their printed schedules, so I guess they just fucked up their website. Grand.

Thus, instead of seeing Seabear, we started the festival with Cymbals Eat Guitars. I wasn’t overly impressed by them. The music started off boring, then there were a few interesting moments and, instead of sticking with those, they reverted back to boring before long. But boredom didn’t last long because Beach House came on next and played the nicest gig I saw at the whole festival. Their music is excellent, they played wonderfully, and it seems likely that I secretly want to be a hippie. 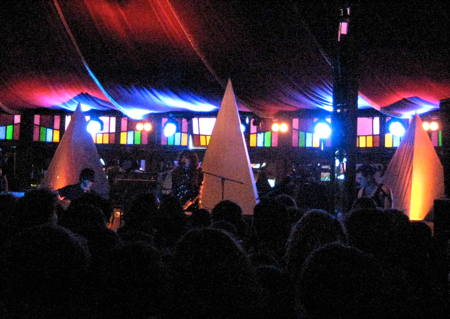 And that was as close as we got to the music on Thursday. We needed to leave the Spiegelzelt for food and the queue was far too long to get back in in time for Seabear later in the evening. And seeing them on the screen in front of the Spiegelzelt didn’t make up for that either as you could hardly hear the music there. 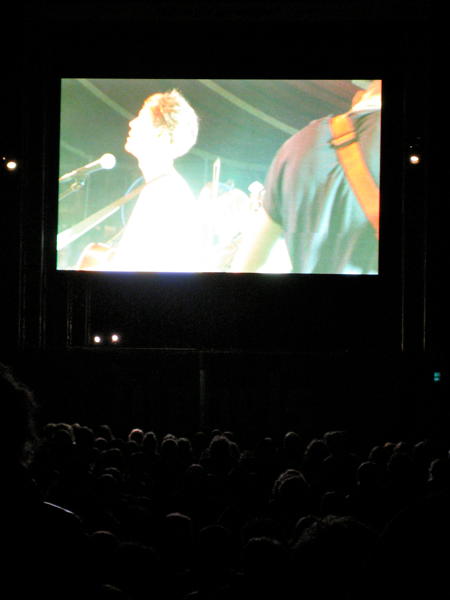 Friday started with our usual camping breakfast which includes plenty of coffee and fried eggs. Then we went to town for lunch in the Doppeladler where the food was fine but the staff seemed a bit overworked (on what I presume is the the only weekend in a year with many people coming) and we had one of their waitresses tell the head-waitress something along the lines of working from 9 in the morning till midnight: my ass! while the head-waitress was taking our order. Ah well…

Back from that excursion, we had a quick glimpse at Detroit Social club and then saw Fyfe Dangerfield (of the Guillemots) play a lovely gig in the Spiegelzelt. 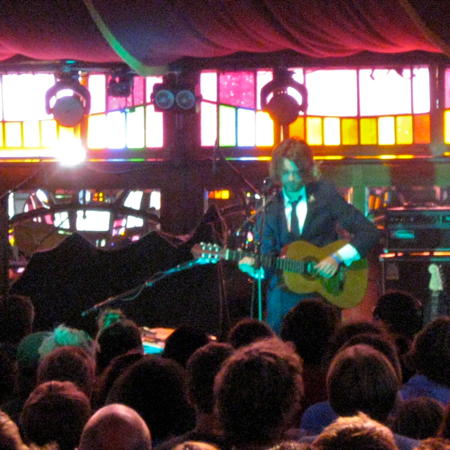 Next we went outside and saw a bit of the mystery band which was marked with a question mark in the schedule. It turned out to be Philipp Poisel who, with his boyish charms seems to be an up-and-coming star of German indie music, but whom I didn’t find particularly interesting (sounded like a Grand Hotel van Cleef band to me). Then came Rox, who seemed very ‘professional’ and whose music style I considered rather out of place for Haldern. She was followed by Delphic whose more electronic sound may not be mainstream for the Haldern audience, but whom I consider different in an interesting and pleasing way. 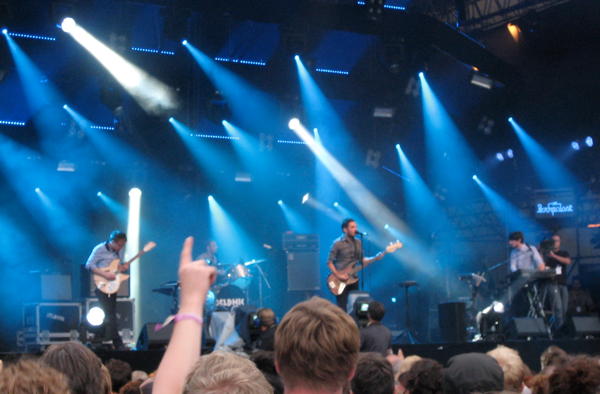 Next on were Mumford & Sons whose nice songs and quirky instruments made a great gig and were perfectly complemented by Beirut who followed them on stage (and whose middle-east name always seems at odds to me with their Balkan sounds – they really sound like they came from a Emir Kusturica soundtrack – with a bit less joy an extra hint of depression, perhaps). 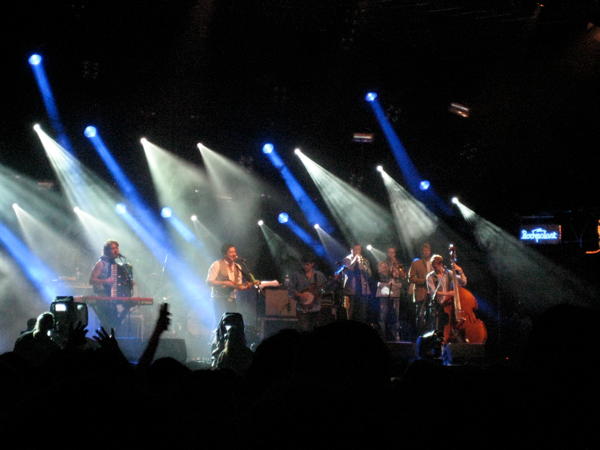 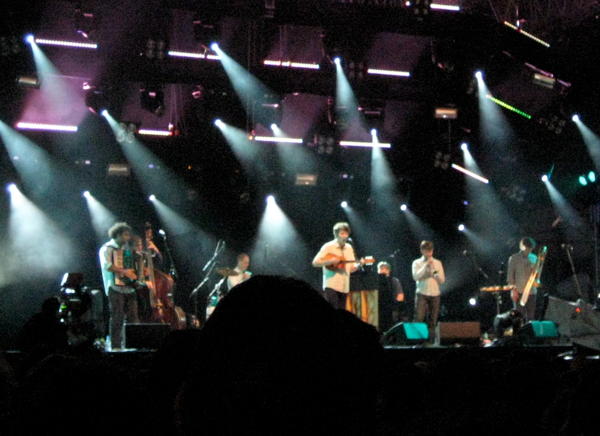 We concluded the evening by seeing Thus:Owls in the Spiegelzelt. Nice music, but we started being word out at the time. So worn out that, unfortunately, we couldn’t muster the energy to stay on and see Junip at twenty to three. 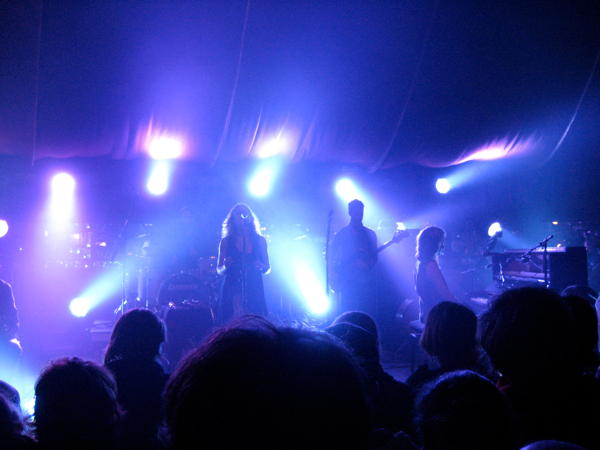 Saturday began and still there was no rain. Even better: the sun was shining and it started being a little warm. Warm enough to enjoy a swim in the lake next to the festival grounds. A good way to ‘chill-into’ the day.

We tried to see Nils Frahm do some piano magic in the afternoon. But thanks to the poor information on the schedule we thought this was happening in town, just to be sent back to a place right next to the campground from there. When we arrived, the tiny sound studio was packed, hot and oxygen-free. All we got out of it was a lengthy walk. A real shame, because I thought the music was nice. We also missed Portugal, The Man because of this.

After that somewhat rocky start, we enjoyed most of the day at the main stage. Starting off with Fanfarlo whose music I found as enjoyable as I found the band members’ moustaches freaky.

Next up were Frightened Rabbit, who deserve praise for their cool band name and played a nice gig. Then Blood Red Shoes played. People seem to adore them for their ability to blast away an audience as a duo with just a guitar and a drumkit. Unfortunately they seemed to have left that magic at home this weekend and appeared rather indifferent to me. They were followed by Efterklang who played a cool gig full of their great songs.

After some pizza and seeing a bit of the Bear in Heaven gig in the Spiegelzelt, Sophie Hunger played on the main stage. I have to admit I don’t care too much for her music, but she did a great job taking the piss of the music ‘journalist’ guy who interviewed her a bit before her gig. Speaking about interviews, Yeasayer who played later at night did a good job mocking him as well. 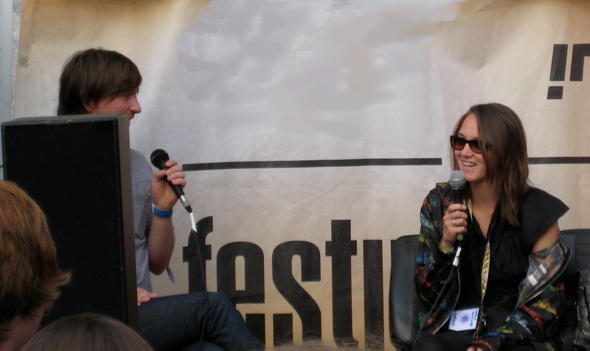 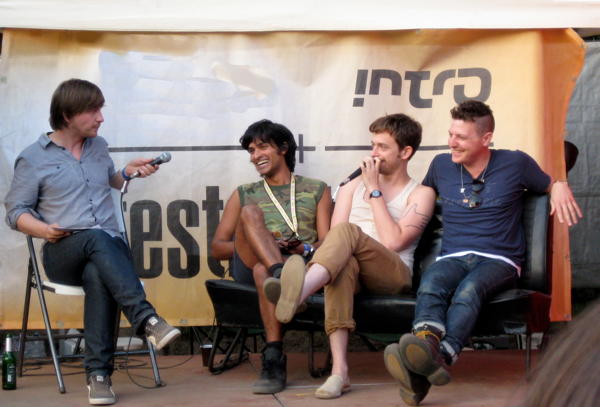 Music on the main stage closed with one of the festival’s highlights: The National playing a full ninety minute gig. The National keep amazing me, they may look like your typical old men’s ‘rock’ band and their songs have the speed to match that cliché. Yet, there’s that certain intensity and tension in their songs – and their singer’s voice – which make them unique and enjoyable. And which made the gig pass rather quickly, ending the festival for us. 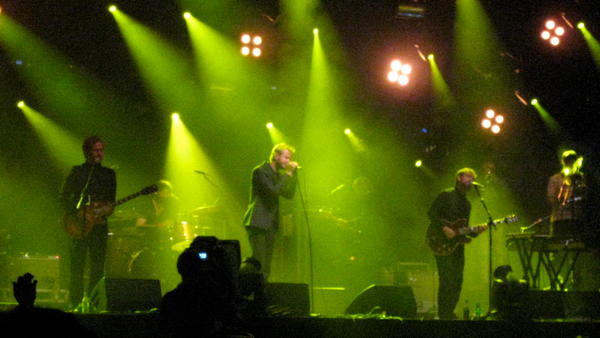 And that was Haldern 2010 for us. See you there next year!