It being August again, it meant yet another trip to the Haldern Pop festival for me and my friends. I think this time our group consisted of more people than ever thanks to extra enthusiasm from Steffen’s friends.

This summer being the none-summer that it is, we were a bit weary about the prospect of having to camp for a few days. It had been cold and raining for weeks. So we went well-equipped, not just with raincoats and wellies but finally also with last-minute pavillion to keep us dry. That came extremely handy in the times when it did rain. But to be honest, the rain was nowhere as bad as we had feared.

Musically Haldern held quite a few well-known attractive bands for us this year and possibly the largest variety of completely unknown or just vaguely known bands we had so far.

Thursday night in Haldern being what it is, meant the usual less-than-convenient facts: loads of enthusiastic people already being present and the only music being in the beautiful but small Spiegelzelt – apparently re-named to Spiegeltent this year. So we had to start with a fair amount of queueing to begin with. To make things extra-unpleasant for the first-time Halderners it was raining at the time, but eventually we did manage to get into the tent, seeing the great gig of The Avett Brothers on the screen outside while waiting and making it inside in time for Anna Calvi who played a lovely gig. 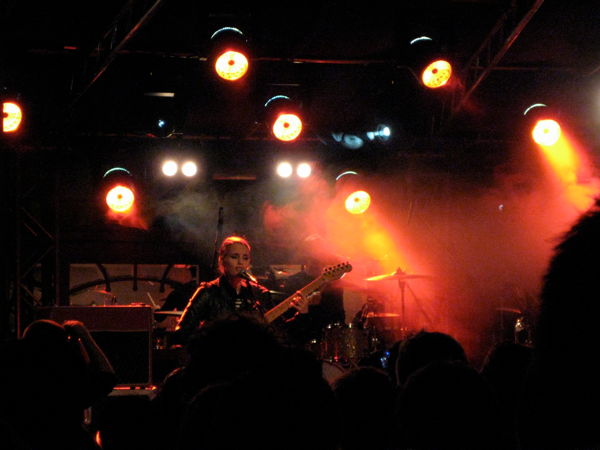 Of course we couldn’t leave after just one gig, particularly after waiting in the rain for an hour. So we stayed on despite not knowing the upcoming band, called the Brandt Brauer Frick ensemble. It took ages for the stage to be set up for them. Probably because of all the ‘classical’ instruments – including a cello, a grand piano and a harp – which had to be set up for ten musicians. And then the music sounded like techno (not that I knew what real techno sounds like…). A surprise and a very pleasant one. A very cool gig and band discovery to start things off with! 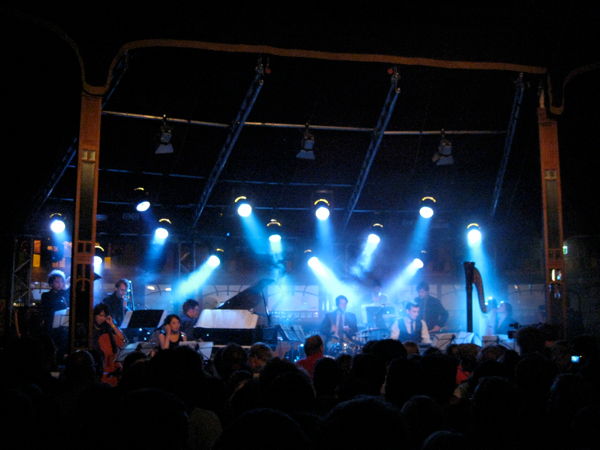 And that was Thursday night already. More a chill-in phase than a huge amount of music. But with all the traveling and setting up we did before, it was time to enjoy some drinks in our pavillion.

After a really rainy morning, we went to pick up more people from the station, enjoyed some drinks in town and finally went to the main festival grounds. After being to the huge Hurricane festival two months ago, Haldern’s Reitplatz felt so sanely small and pleasant in comparison.

The first band we saw, Golden Kanine stressed the ever-increasing popularity of string and brass instruments in popular music. They were a pleasant enough start, though the trousers of the saxophonist kept freaking me out.

Next on were The Antlers, who also played a nice and somewhat unexciting gig. They also brought the first red keyboard on stage for this year. Somehow keyboards started being red rather than black two or three years ago. 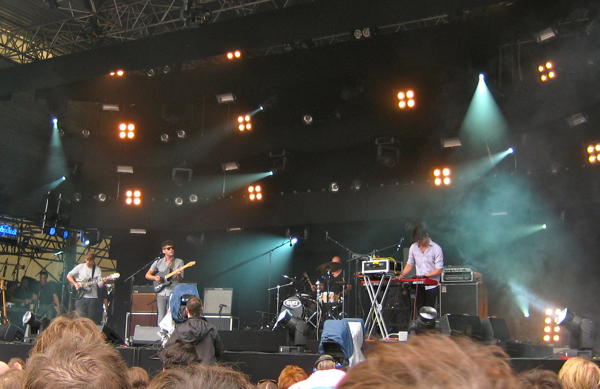 Heading for the Spiegelzelt once more – somewhat easier now that the main stage was open and attracted the majority of the crowd – we saw the second half of the gig by Wild Beasts which was another pleasant surprise. 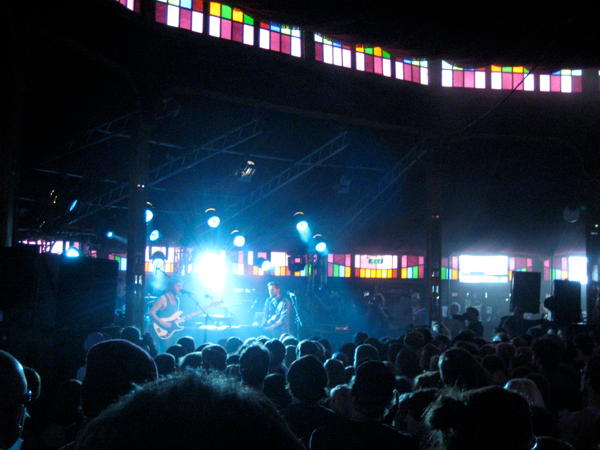 But things became even better afterwards. I had heard Socalled’s music before. Pretending to be Hip-hop (which I would not like) but being much cleverer and more fun that that. And the gig was just great. From the music to the magic tricks to the greedy Smurf shirt and the exotic music for pop music stages. Much recommended. 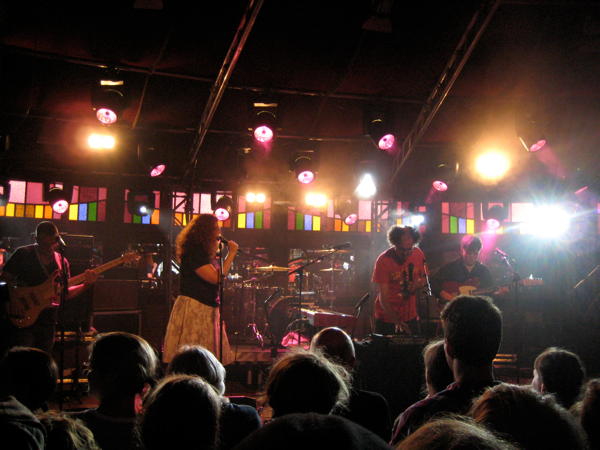 So far so good. Next on was Miss Li with a well performed show and the biggest saxophone on earth in her band – a concoction which just felt like a record company executives wet dream which can sing. 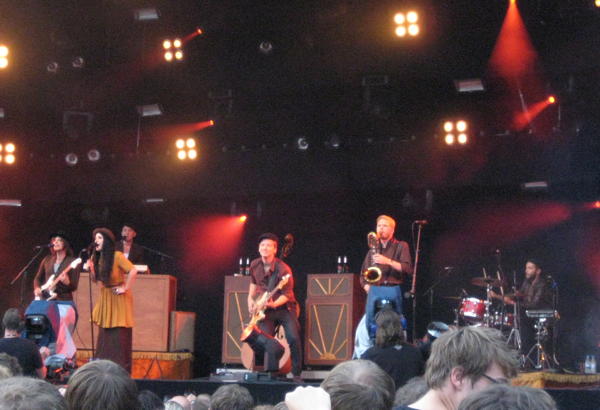 Next on were the wonderful Okkervil River. I keep enjoying their albums a lot. And consequently I enjoyed their gig. However, I kept thinking that they seemed somewhat bored and unengaged. Unlike at Haldern 2008 where I thought they were the best band playing the festival, they just didn’t engage me that much this time around. 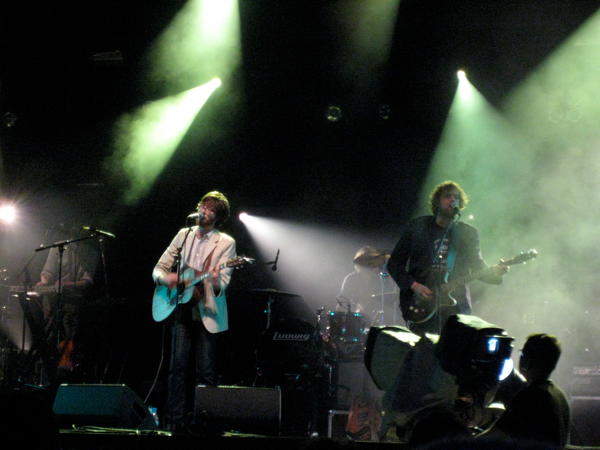 The next band were The Wombats whose music I’ve always found enjoyable, perhaps even a bit more than is adequate for my age. Their gig was fun, but they also didn’t seem as engaging and fun as they did at Hurricane two months ago were they were great. Perhaps I should wonder whether bands just seem better the first time around or whether they play greater gigs in the afternoon when it’s still bright outside… 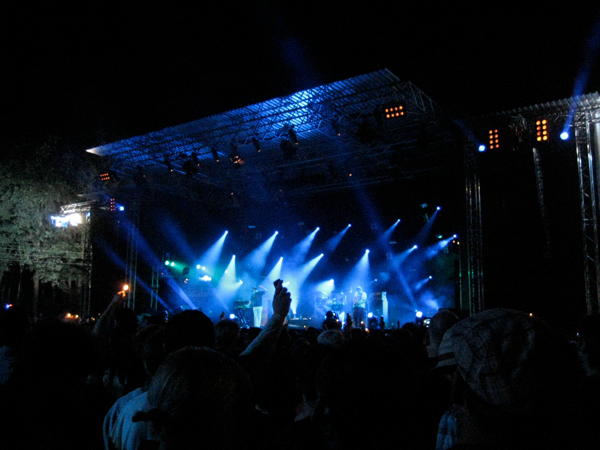 The headliner for the evening went by the Name of Tom Isfort & John Grant, a singer with a complete orchestra. Again this meant what felt like an eternal period to set up the stage and get the mikes right and then the music was rather disappointing. Not a good way to finish of such a great festival day! 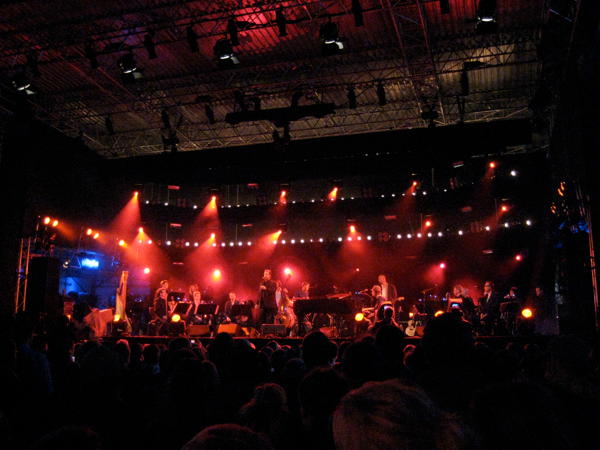 But luckily there was still the Spiegelzelt! We managed to get in there half way through the show put on by three artists of the Erased Tapes label. We had missed the first one but managed to see the second half of Nils Frahm and Anne Müllers piano and cello gig which was a great and consoling way to end the evening before heading back to the tent on surprisingly well-lit paths. The campgrounds were lit by what looked like giant gas lights this year. Cool: 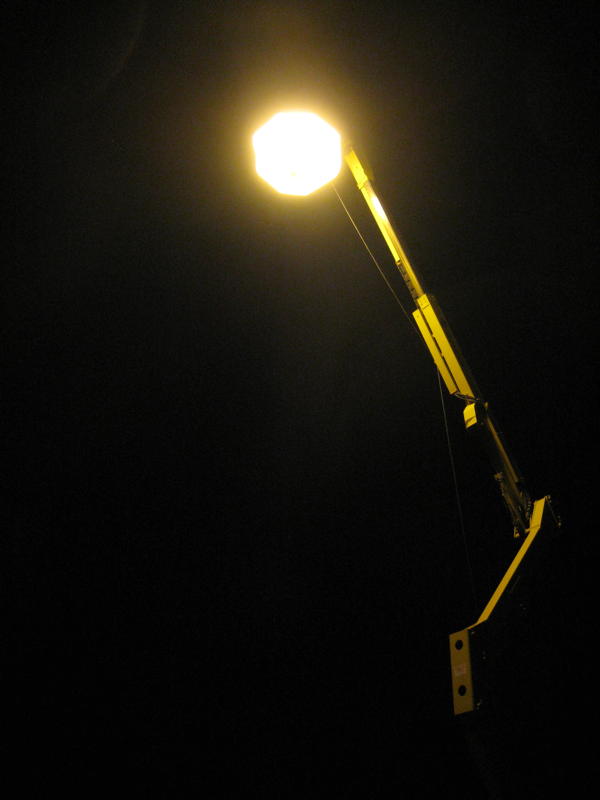 Saturday morning started off cloudy but there even was short period of sunshine. Which we luckily used to head for a swim in Haldern’s famous lake, meaning we missed out on the first few bands but were there in time for the James Blake gig which I really wanted to see after listening to the album a gazillion times and reading that he does these fantastic gigs. The music was still great, but I failed to see what’s particularly remarkable about the show they put on. 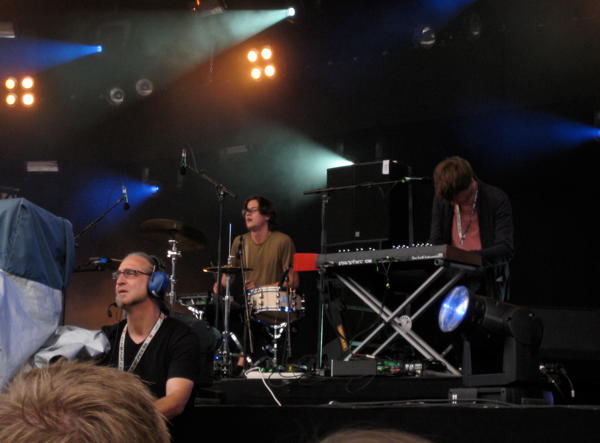 The following band were the rather curious LaBrassBanda, speaking Bavarian accents and playing brass music as the name suggests. Entertaining, but in the slightly creepy way you’d expect from people wearing T-Shirts about ‘butts’. 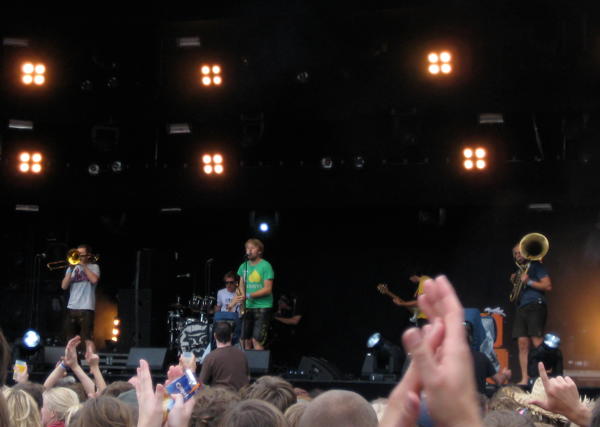 The next highlight was on its way with Wir Sind Helden. It’s been ages since I last saw them play live and – to be honest – I don’t find their newer albums quite as appealing. But their gig did not disappoint at all. A great performance, plenty of great old songs for grumpy old people like myself, a good spirit and even extra nice stage-decoration with lamps hanging above the band. 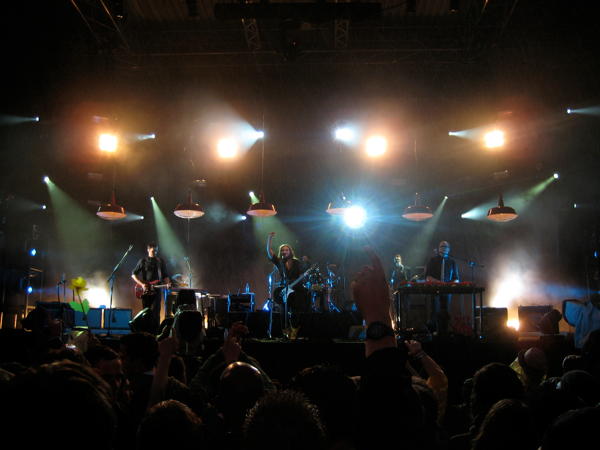 Some rain followed, thanks to plastic clothing it didn’t hurt. Queueing for the Spiegelzelt we saw Hauschka on the screen. That seemed like a pretty cool gig as well and included table tennis balls in a piano. A shame we couldn’t see it directly. Instead, we saw Warpaint who were on afterwards. Well worth seeing, it’s good to have strong girl bands. 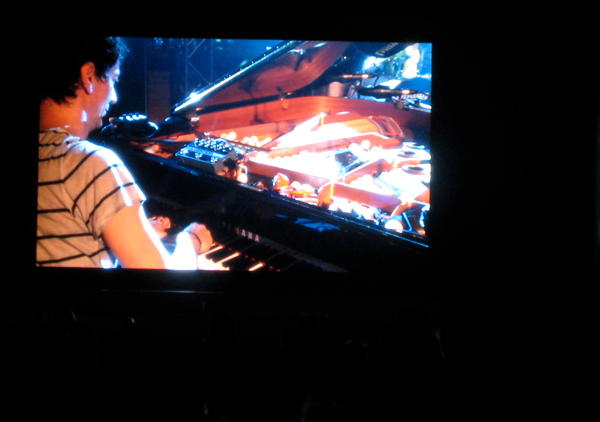 And the next highlight was following! Namely this decade’s favourite hippie band, Fleet Foxes playing on the main stage. A good way to chill out, one could have almost gone to bed after that. 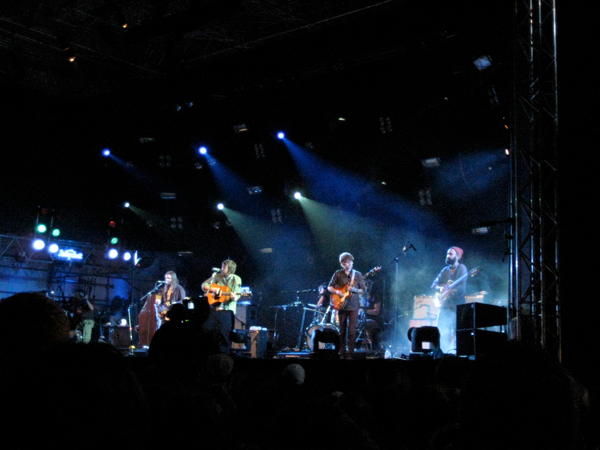 Just that the day wasn’t quite over yet. Heading for the Spiegelzelt once more, I saw Suuns who played solidly loud music for a change. And I had my yearly Haldern meeting with Jan at that occasion. 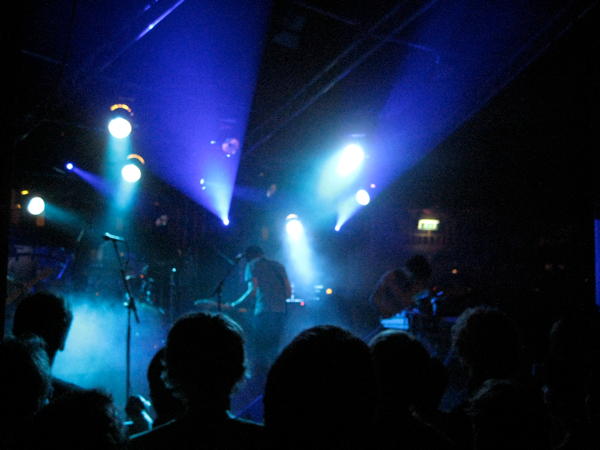 The final band on the main stage were Explosions in the Sky. Solid loud music with plenty of guitars, but somehow I found I can’t really match the quality of Mogwai, say and perhaps something either more lively or less noisy would have been more appropriate for the moment. Still, an impressive closing ‘act’ after which we were off to the tent.

And that was that, another Haldern was over and we awoke in the morning with rain coming down on our tent, trying to decided whether we need to get out of there quickly or whether it will become drier. We left soon-ish, managing to pack everything up and even fit seven people plus all the equipment into two small cars. To finish off the indulgence we treated ourselves to a big brunch in a café in nearby Hamminkeln. Despite being a somewhat un-festival-like thing, we learned last year that it’s a great way to recover from the weekend and gain strength for the way back home. It’s also local enough for the people working there to sympathise – after all, their kids were at the festival as well.

The trip home was uneventful. However, a bad aftertaste is left by my iPod not waking with me in the morning and having remained dead since. Without the web browser and Angry Birds in my pocket I’m feeling a bit naked.